The AAA-ICDR champions like-minded organizations in their diversity and inclusion efforts, playing an integral part in broadening the influence of ADR in conflict management and contributing to a more economical and timely resolution of disputes.

From co-sponsoring, organizing, funding, hosting, and providing speakers or marketing assistance to partnerships, the AAA has built relationships with national, racially and ethnically diverse, and local bar associations, law schools, and trade groups around the country. These events provide training and create opportunities for diverse practitioners.

The AAA has built coalitions with national, racially and ethnically diverse, and local bar associations and law schools around the country, sponsoring and participating in events to provide training and create opportunities for diverse practitioners. These arbitrator-recruitment and training initiatives resulted in over 20 diverse individuals recruited to join the AAA Roster.

Not a comprehensive list, the following reflects the types of activities engaged in by the AAA:

The National Bar Association (NBA)
Founded in 1925, the National Bar Association is the nations’ oldest and largest national network of predominantly African-American attorneys and judges, representing the interests of approximately 66,000 lawyers, judges, law professors, and law students. The NBA is organized around 23 substantive law sections, 10 divisions, 12 regions, and 80+ affiliate chapters throughout the United States and around the world.

The AAA has been heavily involved in this organization for decades, providing information, education, and resources. In 2020, AAA executives Sasha Carbone and Harold Coleman, on behalf of the AAA, received an award for service to the NBA in providing training, support, and guidance to the NBA’s ADR Section arbitrators and mediators since 2009.

National Association of Minority and Women Owned Law firms (NAMWOLF)
NAMWOLF was founded in 2001 as a 501(c)(6) nonprofit trade association comprised of AV-rated U.S. law firms owned by racially and ethnically diverse and women, as well as other interested parties, with a mission to promote diversity in the legal profession. Its approach is to foster successful relationships among preeminent racially and ethnically diverse and women-owned law firms and private or public entities with the intent to achieve equity in legal opportunity.

NAMWOLF assists its members in developing strategic alliances, coalitions, and affiliations with corporations, in-house counsel, and other legal trade associations.

The AAA has partnered with NAMWOLF for years on recruiting initiatives for AAA panels and providing information, education, and resources to their members, who include litigators and in-house counsel from major corporations.

American Bar Association Margaret Brent Awards
Arriving in the colonies in 1638, Margaret Brent was the first woman lawyer in America. The Commission on Women in the Profession established the Margaret Brent Women Lawyers of Achievement Award in 1991 to recognize and commend the accomplishments of women attorneys who have excelled in their field and paved the way to success for other women lawyers.

Each year, the Commission honors up to five outstanding women lawyers at the Margaret Brent Luncheon at the ABA Annual Meeting. The AAA has provided years of sponsorship for the Margaret Brent Awards to celebrate and support the accomplishments and success of women attorneys.

For each of the following selected diversity-related events, the AAA was substantively involved in co-sponsoring, hosting, or organizing; providing speakers, funding, or marketing assistance; or otherwise supporting the program.

To speak with our experts, call us or fill in the form below. 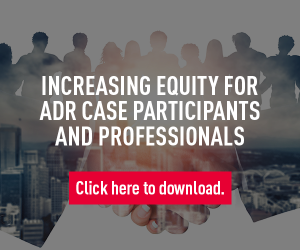