Putting the Public, the Process, and the Parties First

With that comes enormous responsibility, which the AAA-ICDR® embraces. Its work lessens the load of a tremendously overburdened court system. Its efforts ease the financial hardships of those shattered by natural disasters. The foundation it established supports access to justice for all.

The AAA-ICDR has a core dedication to service and particularly to education. It would be gratifying to focus on teaching people to stay out of disputes; however, since that is not a realistic objective in today’s world, the AAA-ICDR provides fair, rational, faster, and less adversarial means to handle the disputes that inevitably arise.

Contrary to a common misperception, arbitration is confidential—not secretive. Parties are free to talk about their cases; it is the AAA-ICDR and the arbitrators who are bound to keeping parties’ confidences, similar to a judge and jury.

The AAA-ICDR aims to move even the most complicated, multi-faceted cases through mediation and arbitration fairly and cost effectively, with the goal of getting parties back to business as soon as possible. To that end, 63% of commercial cases filed with the
AAA-ICDR settle prior to going through the entire process to award. In fact, 40% of the settled cases do not incur any arbitrator compensation. Fees collected by the AAA are transparent and readily available on its website, leading to a more predictable arbitration forum cost.

The AAA-ICDR Roster of Arbitrators and Mediators is composed of distinguished former judges and leaders in the legal and business communities with industry-specific knowledge and expertise. Arbitrators and mediators are not employees or contractors of the
AAA-ICDR, which maintains an arms-length relationship with its panelists.

AAA-ICDR staff members, arbitrators, and mediators are held to strict principles of integrity (fairness and impartiality), conflict management, service, and diversity and inclusion.

Reducing the Burdens of the Courts

The AAA was founded in 1926 following enactment of the Federal Arbitration Act, with the specific goal of helping to implement arbitration as an out-of-court solution to resolving disputes. While it administered international commercial disputes as early as 1951, the AAA formally established the ICDR as its international arm in 1996.
AAA Mediation.orgTM was launched in 2014 to provide greater access to mediators.

Beginning with a single case (the Actors’ Equity Association’s Basic Minimum Contract, one of the first industry contracts to include an arbitration clause wherein controversies arising between actors and managers are referred to the AAA), AAA and ICDR arbitration clauses now are included in thousands of commercial, construction, consumer, elections, employment, environmental, government, labor, and real estate contracts.

Natural Disaster Relief. Because of the AAA’s status as a not-for-profit, public-service organization with a history of neutrality, states repeatedly designate it to provide disaster-relief programs. The AAA’s expertise in customizing mediation programs and skilled mediators have settled thousands of claims for residential and business owners for damage from Storm Sandy in New York and New Jersey, Hurricanes Katrina and Rita in Louisiana and Mississippi, and Hurricane Andrew in Florida.

Because it is the most experienced arbitral organization, the AAA is able to innovate credibly. Listening to its customers over the years, it has developed flexible options, including Expedited Procedures, Emergency Relief Options, Alternative Fee Arrangements, Streamlined Three-Arbitrator Panel Options, and a suite of à la carte services. For example, the Arbitrator Select program was developed out of a recognition that some parties desired to utilize the skilled AAA and ICDR arbitrators without full case-administration.

The Foundation is a 501(c)(3) not-for-profit organization that funds critical domestic and international projects. This effort fills acute needs in the ADR community by expanding the use of ADR, improving the process, increasing access to ADR for those who cannot afford it, and sharing knowledge across different cultures. The AAA-ICDR provides much of the financial support for the Foundation, as do many of its arbitrators and mediators. Grants have included funding for:

To learn more about the AAA-ICDR and its mission, please contact Michael Clark at clarkm@adr.org.

To speak with our experts, call us or fill in the form below. 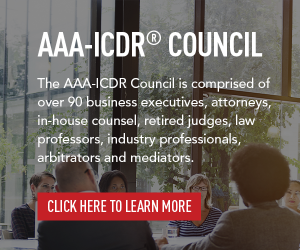